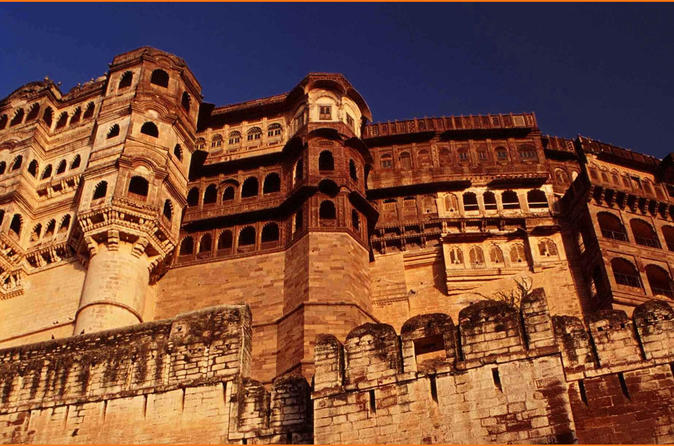 A panoramic tour of Breathtaking Mehrangarh fort followed by a sumptuous dinner in a typical restaurant offering awesome view of the Mehrangarh Fort.

Pick up will be provided from your hotel in Jodhpur. Mehrangarh Fort is one of the largest and magnificent forts in Rajasthan. Located on a 150 m high hill, it was founded in 1459. To ascend the fort you have to cross seven gates bearing the marks of the various battles fought in the past. The second Gate of the Fort still stand boastfully even after being hit by the canon ball by the attacking armies of Jaipur during wars. One of the gates is Jayapol, meaning victory. It was built as a symbol to commemorate his victories over Jaipur and Bikaner armies. Another gate named Fattehpol was built again meaning victory as a mark of defeating the Mughals. There are several palaces inside the fort which you can explore. Among all those Palaces, the Moti Mahal is the most prominent which has the royal throne of Jodhpur, the Sringar Chowki. Another highlight is the chhatri of a Solider where he fell while defending the fort against the armies of Amber.

After the Fort tour proceed towards the restaurant with the Fort’s view booked for you for a lavish dinner on fixed menu basis. An intimate setting awaits you for a memorable evening against the backdrop of the illuminated palace.
The restaurant serves excellent multi cuisine delicacies to the guests. Pamper your taste buds with the mouth watering food. Your tour ends with hotel drop-off in the evening (before 09PM).

A panoramic tour of Breathtaking Mehrangarh fort followed by a sumptuous dinner in a typical restaurant offering awesome view of the Mehrangarh Fort.