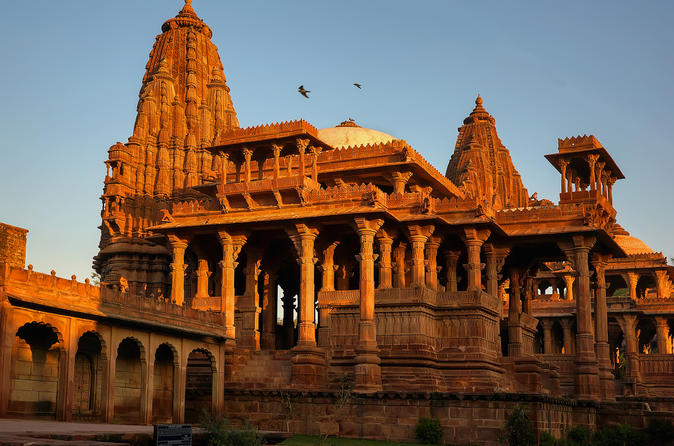 Take a tour of the enchanting town of Mandore. Visit ancient sites and marvel at beautiful temples and gardens

One of our most exclusive excursions takes you to the Jodhpur town of Mandore. Meet our representative, your private guide in the lobby of your hotel and gear up for a three-hour tour to one of Jodhpur's most ancient towns. Mandore gained historical significance as the seat of the Pratiharas of Mandavyapura in the 6th century A.D., It is also known as the native place of Ravana's wife Mandodari. In the 14th century, Mandore served as the capital seat of the Rathores, until it was moved to Mehrangarh in the 15th century by Rathore Chief Rao Jodha. Set in a charming landscape, with cenotaphs of Marwar rulers and a Hindu temple featuring the 33 crore Hindu gods and deities, is the magnificent Mandore Garden. The garden, now converted into a museum, also boasts of various artefacts and statues and has a "Hall of Heroes", commemorating the folk heroes of the town. The cenotaphs here, are unlike the typical chattri-shaped ones, popular in Rajasthan, but are built on the lines of Hindu temples, in that they are high, have fine columns, and a red sandstone spire. Each cenotaph is uniquely designed with intricately carved stone work, with Maharaja Ajit Singh's cenotaph being the most prominent one. The serenity of the Mandore Garden is enhanced by the little lakes surrounding it and the Langur monkeys frolicking running around the vicinity. After exploring every corner of the Mandore Garden, we return to your hotel, where your tour concludes.

Take a tour of the enchanting town of Mandore. Visit ancient sites and marvel at beautiful temples and gardens