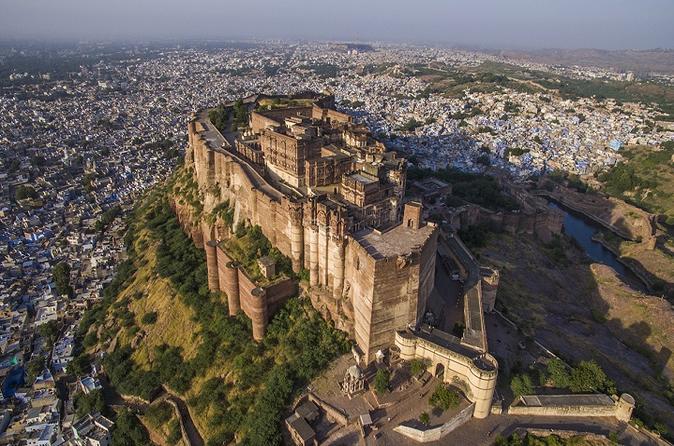 Following a hotel pick-up from your Jodhpur City area hotel at 9am, your first stop will be Mehrangarh Fort. Perched on a 150 m high hill, its sprawl is the most formidable and magnificent fort in Rajasthan. Rao Jodha founded it in 1459 but subsequent rulers of Jodhpur have also added to it over the centuries. A meandering road leads to the from the city 5 kms below. Battle scars of canon ball hit by attacking armies of Jaipur can still be seen on the second gate. To the left is chhatri of Kirat Singh Soda, a soldier who fell on the spot while defending the fort against the armies of Amber. There are seven gates, which include Jayapol meaning victory built by Maharaja Man Singh to commemorate his victories over Jaipur and Bikaner armies.

On the way down from the fort, on left is Jaswant Thada, the graceful marble cenotaph of Maharaja Jaswant Singh II. His son Maharaja Sardar Singh built this monument known as the Taj Mahal of Marwar in the memory of Maharaj Jaswant Singh II of Jodhpur. The main memorial has been built like a temple with intricately carved marble stone. A visit to this structure is through the rocky hills giving it a secluded and a mystic aura.

After lunch at local restaurant (on own), continue to Mandore Gardens. Mandore was the former capital of Maharajas of Marwar and is located about 5 miles north of Jodhpur. It was later abandoned for the security of Mehrangarh Fort. Here you will find the dewals or cenotaphs of Jodhpur's former rulers.

Unlike the usual chhatri-shaped cenotaphs typical of Rajasthan, they were built along the lines of a Hindu temple, four storey’s  high, with fine columns and an elegant spire, all in red sandstone. The most impressive is the dewal of Maharaja Ajit Singh (reigned 1678-1724). These cenotaphs are set in beautiful landscaped gardens. Nearby is the hall of heroes, dedicated to various deities and fabled Rajput folk heroes, whose statues are carved out of rock and painted in bright colours. Next door is a larger hall called "The Shrine of the Three Hundred Million”, filled with brightly coloured images of the various Hindu Gods. As you climb up the hill, you come to the ruined city of Mandore, with its old palace. The beautiful Maharani's cenotaphs set apart on a rocky outcrop is a ten-minute walk over the hill. Today its extensive gardens with high rock terrace make it a popular local attraction.

Next you head to a prime attraction of the city, the Clock Tower and the colourful Sardar Market near it. Narrow alleys lead to quaint bazaars selling textiles, antiques, silverware and handicraft. At approximately 5pm, you'll arrive back at your hotel in Johdpur where the tour will end.